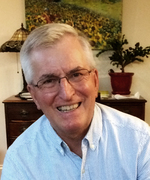 Cremation has taken place and a celebration of his life will take place in the future when we can gather again. Online condolences can be offered at www.rawalker.ca