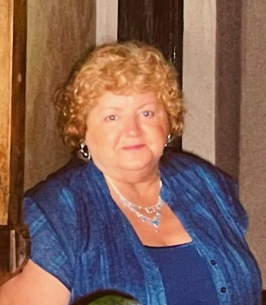 It is with heavy hearts that we announce the passing of Audrey “Sandy” Marie Belair, 75 of Sackville, Nova Scotia. She was born to the late William Bond Riles and Beatrice May Riles (Chant) in LaPoile, NFLD on January 26,1947. In this small Newfoundland outport, her family of seven brothers and a sister worked hard and overcame obstacles like losing another sister at birth. Although they all loved LaPoile and would visit for “Come Home Years” again over the years, the family moved to Halifax, Nova Scotia on September 25th, 1955.
With this move she met a new, adventurous young girl named Kenna. The two became instant friends. They had many adventures in those days with the Fiat Spider in their mini skirts or hot pants, unbeknownst to their parents. In fact, this is how the nicknames began. Just in case someone was looking for the two girls that had been out having fun, she became Sandy and Kenna became Jeannette. This friendship would last her entire life. Sixty-one years of supporting each other through challenges and enjoying celebrations.

After school she was employed with Dalhousie University. Then she was employed with MT&T as a switchboard operator. She also spent some time employed with Sears. However, over the course of ten years, as her three girls were born, she realized that she was meant to care for her children. Often taking in a nephew or two as well. She was very active in the church and was a Sunday school teacher at St George’s round church for many years. She was a Girl Guide leader and would go to camps and all the outings. She was part of the PTA and never missed an event that her children were involved in. She loved crafts and always had new ideas to try. She taught us to sew, crochet, garden and even chop wood. She was a bit headstrong and preferred that we not leave her kitchen out of place, but there were lots of cookies and cakes made over the years. She loved to keep her children connected with her large family. There were Christmas parties with BINGO games at her brother’s house, lazy days spent at Lake Charlotte, visits to one of her brothers’ farm, her sister’s long awaited visits from away, mowing her brother’s lawn on his big tractor or building things with him, selling things at the flea market with her family, family reunions and many special occasions.

As her grandchildren were born she enjoyed seeing them grow and being a part of their lives. They each had their own special connection with her either through her love of gardening, music, adventure, her love of chocolate or her sense of humor. She also had seven lovely great-grandchildren.
She really loved to get out in the garden to plant or enjoy nature, especially if she was listening to her favorite music like Bocelli, CCR, Reba or Tupac. Yes, many were surprised to see a senior listening to Tupac. She loved to travel and enjoyed her trips to Cuba, Turkey, Dominican Republic and London with her family. Camping was always an important adventure for her and it gave her time to relax. She also loved going out in the rowboat despite not being able to swim.

During this time she found a job that she really enjoyed, working with flowers. She worked for both The Flower Shop and Deans Flowers for a few years. Then, in 2000, someone named Adele needed her and she answered the call. Adele was a senior who needed private home care. She spent 10 years going above and beyond to make Adele’s last years enjoyable.

After her retirement she was finally able to do things she enjoyed. She had many adventures with family and friends. Even though she couldn’t swim, she loved the beach, and she had to pack that little red car just her way. She had lots of dinners at her favourite Swiss Chalet. She enjoyed some dancing and drinks at a party or two (something she had never done before). Above all, was her love of chocolate. Every holiday she would say she didn’t need anything, yet would look for the gift from her grandson, knowing it was Ferrero Rochers.
Even though chronic pain slowed her down in her last few years, she still had a sense of humour and would find creative ways to keep doing the things she loved. She was always headstrong and didn’t like being told what she could or couldn’t do.

Audrey “Sandy”, was predeceased by her father, William Bond Riles, who she adored, her mother, Beatrice May Riles, her brothers, Roy, Cyril, Gordon, and Reginald, her sister, Dorothy, and her nephews Billy and Kirk. She is survived by her daughters, Lisa (Jon), Leah (Duane), and Melissa (Simon), her grandchildren, Christopher (Megan), Kimberly (Mike), Kaila (Tyler), and Jonathan (Caitlin), her brothers Kenneth, Francis (Roxanne), and Russell (Linda), great-grandchildren, McKenzie, Abigail, Abel, Madilyn, Matthew, Braxton, and Emry, and many nieces and nephews and her beloved cat Nikki.

She had to change doctors later in life and was very lucky to find a kind and compassionate doctor, Dr. Karsten Gehrig. His receptionist, Kathy White, was always amazing with her, going out of her way to make sure she was taken care of.

Thank you to the doctors and nurses at the QEII Health Sciences Centre, particularly those on 8.2. Thanks for the visits from Rev. Laurie Omstead who helped guide her to a peaceful passing. Thanks to all our family and friends who have reached out to us to make this a bit easier.

As per her wishes there will be no service. She would want us to remember her by planting a tree or flowers in her honour, enjoying a day at the beach, having a meal with loved ones and reminiscing about the good old days, listening to music that makes us happy, and positively toasting to her with your favourite chocolate, preferably Ferrero Rochers. In lieu of flowers, donations can be made to Fibromyalgia Association Canada or the Arthritis Society.