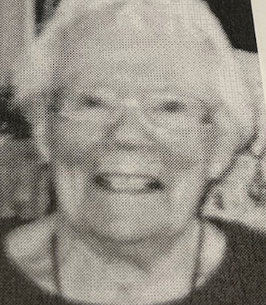 Barbara passed away peacefully on August 6, 2022, in Halifax at the age of 92. Barbara was the only child and daughter of the late Clyde and Mary North. She was predeceased by her husband the Reverend Harry Corbin and her son, Kenneth Corbin.

Barbara was born in Boston but moved with her parents at an early age returning to the family home in Halifax.

A member of St. Matthias Anglican Church, she was a leader and participant in numerous church and youth activities which were at the core of her life.

Barbara met the love of her late the late Reverend Harry Corbin, while he was a deacon in training at St. Peters Anglican Church, Indian Harbour. The were married and Barbara became the perfect Priest’s wife leading the ladies group, organizing Church events, playing the organ and singing in the choir. Well known throughout Nova Scotia Barbara was a leading organizer and participant in the Anglican Woman’s Church Organization.

Barbara and Harry were instrumental in the building of St. Andrews Anglican Church in Indian Harbour. Barbara was the lead of all activities at St. Andrew’s Church for over fifty years until she moved to Halifax. It was often said that Harry ran the Church and Barbara ran the Parrish.

Barbara throughout her life had a love and passion for animals. She started and ran successfully for over twenty years, Pussy Paws Motel, a Cat Kennel located at her home in Indian Harbour. The Kennel and Barbara’s reputation was known far and wide and Barbara looked after numerous cats from outside the Province. Barbara was a Director for many years of the American Cat Association. A former member of St. Andrew’s Anglican Church, Barbara attended the Anglican Church of the Apostles in Halifax.

A special thanks to all of the care workers at the QEII, The Victoria General Hospital and the retirement home who provided such care and compassion to Barbara during her last illness.

Visitation will be held in the Chapel at the Anglican Church of the Apostles in Halifax, at the corner of Bayer’s Road and Connaught Avenue, on the August 10, 2022, from 2:00 to 4:00 p.m.

A funeral service will be held at the Anglican Church of the Apostles in Halifax on Thursday, August 11, 2022 at 11 a.m. with Reverend Mark Marshall officiating. A reception to follow in the Church Hall.

The funeral is being arranged by Ronald A. Walker Funeral Home in Tantallon, Nova Scotia.

In lieu of flowers, a donation to St. Andrew’s Anglican Church 8575 Peggy’s Cove Road, Indian Harbour, Nova Scotia, B3Z 3P5 or the S.H.A.I.D Tree Animal Shelter in Bridgewater, Nova Scotia or the charity of choice. Online condolences can be made to www.rawalker.ca