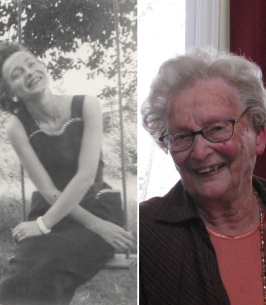 Carol died peacefully on October 11th, 2021. Born on February 27th, 1930, Carol grew up as part of a large family in beautiful Mira Gut, Cape Breton. She spent many days on the legendary Mira River with her dad Joseph, on his boat the Miss Mira.

Carol left home early to live with her Aunt Eva in Port Morien for grade 10, then finished 11 and 12 at Sydney Academy, staying with her sister Eva in an apartment. After finishing high school, she worked at Crowell’s department store in Sydney for 7 years, staying with Eva and her husband George Macvicar and their family.
She moved to the Halifax area, first staying with her brother Charlie and his wife Gloria in Head of St. Margaret’s Bay (Head of the Bay), which would eventually become her hometown. She lived in an apartment in Halifax for a while with her best friend Patsy, working for the Junior Red Cross. Carol was also a member of the Women’s Royal Naval Service (WRNS) and enjoyed life in Halifax with her friends.

Carol met her future husband James (Jim) Pinhey in the United Baptist church at Head of the Bay where they both sang in the choir and remained faithful members for the rest of their lives. Music proved to be a strong thread in her life, and her family’s. Besides singing in the choir, she played the piano and organ, and was the long time organist at their church. It’s no surprise that she and Jim raised a family of musicians and music lovers. Love and music brought them together, and has helped keep them all together, forever.

Carol and Jim were married in 1956 after Jim got out of hospital for tuberculosis, and they lived in various places around the province until finally settling down in Head of the Bay in 1962 in a home they built on Bonavista Drive, where they raised their four children with a view of the Bay always in sight. She loved it there and lived the rest of her life in the family home.

Besides her full time job as a homemaker, talented cook and baker (her recipes live on in her children’s kitchens), and child raiser, Carol did a lot of volunteer work over her life, including at the church, the IWK hospital, and the school library. An avid, proficient lover of the English language, she was a voracious reader to the end, as well as the undisputed "Queen of the Crossword.”

Carol and Jim had many adventures after Jim’s retirement, travelling to Europe and seeing sights she never would have dreamed of, coming from a small village in Cape Breton. Most of all, Carol cherished spending time with her family, and was so very proud of all her children and grandchildren, being actively involved in their lives and supporting them in all their endeavours. In doing so, Carol demonstrated and taught the importance of courtesy and respecting others.

She was a sweet, caring person with a wonderful smile, loved by all, and will be missed greatly by friends and family.

The family would like to extend heartfelt thanks to the staff at the 7A Palliative Care Unit at the Victoria General Hospital, for their compassionate care, giving great comfort to Carol during her last days.

Cremation has taken place. Funeral service to be held 11:00 am on Tuesday October 19th at Head of St Margaret’s Bay United Baptist Church. Interment following the service at the Mason’s Point Cemetery. Due to COVID 19 restrictions masks and proof of vaccinations are mandatory to attend.

In lieu of flowers, Carol has asked that donations be made to the Head of St Margaret’s Bay United Baptist Church.