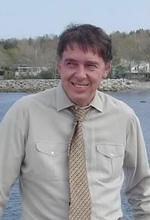 For everything that lives is holy,
life delights in life
- William Blake

Charles passed away peacefully on September 12, 2021 at the QEII Health Sciences Centre, Halifax, after a brave year long battle with cancer, at 71 years of age. Charles left this world the way he lived - with grace, gratitude and deference to the well-being of others. Charles is survived by his beloved wife of 27 years Marilyn Mullett of Upper Tantallon; sister Connie (Cook) Wright and brother-in-law Jamie Wright of Toronto; niece Erin Wright (Tim Ross) of Toronto; nephew Tim Wright (Tiffany Ring) of Haarlem, Netherlands; and grand-niece and nephews Isabella, Leo, Aidyn and Charlie. He is predeceased by his parents Ferne and Claude Cook of Waterville, Annapolis Valley and in-laws Kathryn and Cyril Mullett of Amherst, Nova Scotia.

Charles spent his formative years in Waterville, Kings Co. At Acadia University, he studied Political Science and English. At Dalhousie University, he earned his Commerce degree in 1974. Throughout the next 30 years, Charles’ employment reflected his interest in business, at the Ontario Ministry of Revenue; Bank of Nova Scotia; NS Department of Government Services; and The Mortgage Centre, Halifax.

Charles was happiest in nature enjoying life's simple pleasures - observing the wildlife around his home at Stillwater Lake, taking a swim or a solo paddle in his canoe. His favourite place was the cottage he built on the Cook family property at Harris Lake, Lunenburg County, where he and Marilyn spent countless quiet nights together reading by a wood fire. He was well-known for navigating the motorized vessels on the lake in his Walker Bay sailing dinghy, showing up randomly at people's docks for a visit.

A voracious reader, Charles had a passion for Nova Scotia's history and politics (an inherited Cook trait); his bookshelves are lined with nonfiction and fiction books highlighting the events of World War 11. Charles spent a season sailing on the Bluenose II and saw every inch of Nova Scotia's coastline. He loved a good adventure. Two memorable ones were a sailing vacation in 2016 from Mahone Bay, NS to Souris, PEI, as a crew member on “Northern Dancer”; and a two-week tour of Italy with Marilyn in 2018. After hitchhiking across Canada in the 1970s, working at manufacturing plants along his route, he proudly maintained there was nowhere in the world that matched Nova Scotia's raw beauty. He never changed his mind about that! Charles' gentle spirit, playful chuckle and lively political commentary, will be forever missed by his many friends and family.

Cremation has taken place under the direction of Ronald A. Walker Funeral Homes, Tantallon. In keeping with Charles’ wishes, there will be no visitation or funeral service. There will be an informal social event later this Fall in Halifax County, which will be announced in this newspaper, so friends and family members may share their memories.
Donations may be made to Nova Scotia Nature Trust; the QE11 Health Sciences Foundation, or a charity of your choice. Online condolences for family may be made by visiting: www.rawalker.ca