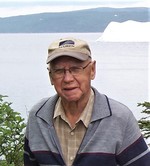 Charles Samuel Thompson of Glen Haven, N.S. passed away peacefully at home on April 14, at age 88.
He is survived by son,Kevin (Sheila) and daughter, Cheryl ( John); granddaughter, Kalie (Marco); Grandson, Scott (Martina); great grandchildren, Ella and Peter. He was predeceased by his wife Ariel Jean; infant daughter, Diane Marie; parents, May and Newton; siblings, Dorothy, Jimmy and Betty. Charlie took great pride in working at Orenda Engines as a machinist during the Avro-Arrow aircraft project in the late 50's. Upon cancellation of the Avro project he returned to Nova Scotia to run the woodworking/metal shop in the Biology Dept at Dalhousie University. His great ingenuity and willingness to help was appreciated by many, and he took pleasure in later years tinkering and repairing in his own workshop. He reminisced often about his trip across Canada and north to Inuvik. He loved dogs, playing cards and socializing; he enjoyed being a member of the St Margaret's Bay Whitecaps. Many thanks to Janet Fralick, caregiver and friend. Online condolences may be made at www.rawalker.ca. Service at a later date. Donations welcomed at Bide A While animal shelter, Hope for Wildlife, or charity of your choice.