To share your memory on the wall of Daniel Smith, sign in using one of the following options:

Please note the change in venue for the Funeral service for Daniel it will be held at 2 P.M. Tuesday, April 2, 2019 in the St. Margaret's Center, 12 Westwood Blvd., Upper Tantallon.

In lieu of flowers, donations can be made to Parkinson’s Society of Canada. The family would like to express a special thank you to the staff at Arborstone Enhanced Care. Online condolences can be made to www.rawalker.ca
Read Less

To send flowers to the family or plant a tree in memory of Daniel Sinclair Smith, please visit our Heartfelt Sympathies Store.

Receive notifications about information and event scheduling for Daniel

We encourage you to share your most beloved memories of Daniel here, so that the family and other loved ones can always see it. You can upload cherished photographs, or share your favorite stories, and can even comment on those shared by others.

Posted Apr 03, 2019 at 10:11am
My sincere condolences to Aunt Ruth and family. I have very fond memories of Uncle Danny whenever he visited his sister Lena and brother-in-law Frank in Montreal. Uncle Danny always had a caring smile and a twinkle in his eyes. God bless all.
Comment Share
Share via:
MC

Posted Apr 02, 2019 at 06:07pm
We would like to offer our sincere condolences to Ruth and her family. Wayne has lots of ball field memories of Danny
back in the day. Wayne and Marilyn Christie
Comment Share
Share via:
BB

Posted Apr 02, 2019 at 09:28am
Ruthie & family, so sorry to hear of Danny's passing. Will always remember him for his sense of humour and charismatic personality; He was such a kind and giving person who was loved by all who knew him. Bev Boutilier (niece)
Comment Share
Share via:
AM

Posted Apr 01, 2019 at 09:21pm
Sorry for your families lost, a great volunteer in our community and a fan of every kid playing sports growing up
Comment Share
Share via: 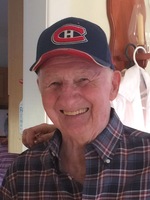