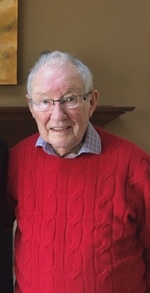 Donald GE Harris
BSCF ‘54, University of Toronto, occurred on Thursday January 9, 2020. He is survived by his wife Jean (nee Cameron) of 63 years, and children Megan (Jeff Snarr), son Peter (Ingrid Weisseneder) and 4 grandchildren, Connor and Mya Snarr and Cameron and Lauren Harris, sister Barbara Turner of Toronto and niece Kathryn Turner (Chris Burrows), nephew Ian Turner (Jen Seglins) and four grand nieces and nephews, Molly and Abby Turner and Ryan and Jaime Burrows. Donald was a long time employee of Parks Canada and served as Superintendent at a number of National Parks. He retired as Manager, Resource Conservation for the Atlantic Region. Cremation has taken place and a gathering at his home will occur at a later date. In lieu of flowers, donations can be made to the QE2 Foundation - Palliative Care Unit or to the Nova Scotia Cancer Society.