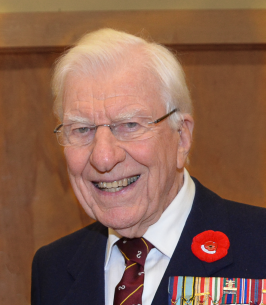 Earl enlisted in the RCAF in 1940 and was assigned to the RAF, 87 Squadron, flying Hurricane fighters on night and day operations over England and Europe, including Dieppe and North Africa. His post war Air Force career included being a test pilot and assignments with Air Defence Command, transport operations with 426 Squadron pioneering arctic and global flight paths still currently used, Chief Flying Instructor in Saskatoon, Sask. and flight training roles with the US Air Force in Texas, and the Canadian Central Flying School. He retired from Maritime Air Command in 1966 and worked as Director of Organization and Methods with the Government of NS until his retirement in 1981.

For over 75 years, he was an active and respected member in numerous Masonic organizations including Ad Astra Lodge No. 130, Grand Lodge of Nova Scotia, Past Master, where he served as webmaster for over 20 years, until turning over the responsibility at age 100; the Ancient and Accepted Scottish Rite 33º, JR Matheson Award recipient; Philae Shriners; Order of the Eastern Star, Evangeline Chapter; and the Royal Order of Scotland. He also volunteered tirelessly with the Air Cadet League of Canada provincial committee and 292 Squadron Halifax Fairview until age 100.

He was especially proud of being able to make good men better through his masonic work and helping others, including students and those in need via charitable work. He was a founding director and major sponsor of the Scottish Rite Learning Centre of Halifax helping those with dyslexia, the Masonic Foundation of Nova Scotia, the Anglican Church and the Air Cadet League of Canada. He was also a patron of the arts. Earl’s sage advise was that “things worth while are worth pursuing, supporting and fighting for, and don’t give up”.

Earl’s family would like to extend their gratitude to his amazing and supportive community in Tantallon and his Masonic brethren. His church involvement, Book Club, Quiz night, Study Group and his many friends and favourite ‘soup ladies’ who sustained him these past years.

A funeral service will be held by the parishioners of St. Margaret’s Church in Tantallon on Thursday March 31st at 11:00 am. This will be available via video link as there is limited seating. Private family internment to be held at a later date. In lieu of flowers charitable donations may be made to the organizations above, the Atlantic Aviation Museum, or a charity of choice.