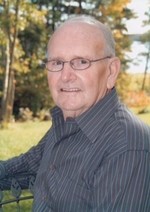 George David Janes
It is with deep sorrow we announce the passing of George David Janes, 84, on Wednesday, February 12, 2020. George was born in Burgeo, NL to Henry and Francis (Standing) Janes. He is survived by his wife of 62 years, Alice (Seaward); children, Cynthia; David (Valerie); Daphne (Paul) Shea; daughter-in-law, Sandra; grandchildren, Christine, Ryan, Robert, Lesley, Brenden, Gillian and Mitchell; 2 great grandchildren, Maleigha and Jack; sisters, Ethel Banks, Hilda Barnes, Lottie (Stan) Mercer; Millie (Danny) Styles; sister-in-law, Mildred. George was predeceased by his beloved son, Martin; brother, Lester; sister, Ena and Daphne. George retired from the Royal Canadian Navy after proudly serving for 25 years. He later returned to the DND as a civilian piloting tugboats and later serving aboard HMCS Quest. George loved his hometown, Burgeo and spent many years walking the paths of the sandbanks with Alice, his children and later his grandchildren. He has gifted his family with beautiful hand carved schooners and furniture but even more precious, his stories and love. He will be missed forever. The family will receive visitors 2-4 p.m. and 6-8 p.m. Wednesday, February 19 and Funeral service will be held 11 a.m. Thursday, February 20 both in the Ronald A. Walker Funeral Home, 13549 Peggy’s Cove Road, Upper Tantallon. In lieu of flowers donations can be made to the Heart and Stroke Foundation. Online condolences can be made to www.rawalker.ca