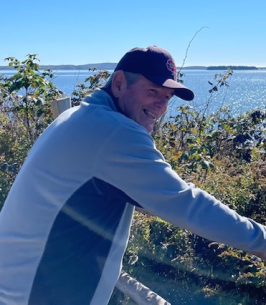 It is with great sadness that we announce the passing of Gordon Malcolm Alward, 71 of Upper Tantallon. Gord passed away peacefully at the Halifax Infirmary on January 27, 2022.

Gord was born in Saint John, New Brunswick and was the second of five children to Errol and Audrey Alward. He and his family spent his early years in Saint John, later moving to Kingston and then to Ottawa. Gord had fond memories of many summers spent at the family cottage on Buck Lake with his siblings.

Gord started his career in communications with Bell Canada in Ontario for several years, and then made a move to BC, where he eventually joined the Federal Government in Vancouver and later Ottawa. In October of 1978 he took what he thought would be a temporary position as a public servant with Canadian Forces Europe in the Communications Group at CFB Lahr, Germany. He met the love of his life, Christine, while on a ski vacation in Austria in February of 1982, and they were married later that year in Kitzbühel. Gord was welcomed with open arms into the Exenberger family, and he found his second home in Kitzbühel.

Gord and Christine raised their two children, Barbara and Christopher, in Germany, living as part of the Canadian Forces Europe community in the Lahr and Geilenkirchen areas. Gord took his job very seriously and was so passionate about making sure the job was done correctly the first time - everyone knew when Mr. Alward meant business. His work gave him the opportunity to travel across Europe and meet many wonderful people that resulted in life-long friendships.

Family was very important to Gord, and the Alward family made frequent trips to Austria and annual trips to Canada. Gord was an avid sports fan, and particularly enjoyed watching football, hockey and golf. Gord loved to golf, but as a lefty playing in Europe, he was surprised to discover that left-handed clubs were very hard to source as the game was predominantly taught right-handed at that time. For Gord, this issue kick-started a passionate hobby (and business opportunity) making clubs for fellow golfers across Germany, Austria, and the Netherlands. Skiing in Kitzbühel was always a highlight of any family trip to Austria, and Gord tended to plan his runs for the day based on his assessment of the quality of the Gulaschsuppe and Kaisersemmel on offer at the nearest Gasthaus.

Upon retirement in 2008, Gord and Christine decided to move to Canada, and they did so in style, sailing on the Queen Mary 2. They settled at their cottage in Burridge Lake, Ontario, to be close to Gord’s siblings and their families. Retirement saw Gord expanding his tool collection to pursue his interest in woodworking, but his summers were always dedicated to the golf course.

In January of 2016 Gord and Christine moved to Halifax to be closer to Barbara. Soon after their move they welcomed their first grandchild, and by 2020 they were delighted to have Christopher’s family also in the Halifax area with their fourth grandchild on the way that Fall. Gord and Christine spent the last few years travelling around Nova Scotia, exploring all that their province had to offer and also acting as tour guides for friends and family visiting from abroad.

Gord encountered some health challenges over the past few years, but he was able to spend lots of time with his children and grandchildren and enjoy retirement. Gord led a happy life as a family-oriented man and was a very strong presence in the lives of all those who were close to him. He was extremely proud of the accomplishments of Barbara, Christopher, Eric and Mandy, and cherished the many adventures he was able to embark on with them.

Gord was predeceased by his parents; brother, Ken, and brother-in-law, Gary Long. Gord is survived by his wife, Christine; his children, Barbara (Eric) and Christopher (Mandy); his grandchildren, William, James, Sarah and Lucas; his sister, Sandra; his brothers, Willy (Eleanor) and Errol (Chris); and his sister-in-law, Ann. Gord also leaves behind many nieces and nephews, his loving in-laws in Austria, and many golf buddies across Canada, especially in Greenwood, Nova Scotia.

A private service will be held on February 4, 2022 with burial and celebration of life to follow in the summer.