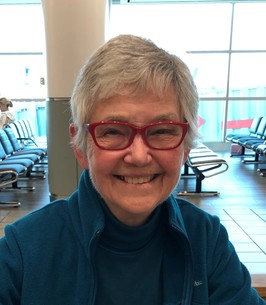 Heather Stewart
June 22, 1941 - December 2, 2021. Heather Stewart was a uniquely kind and caring wife, mother, grandmother, sister, and friend. She left this world on December 2, 2021 after a full life. Born in Thunder Bay (Fort William), Ont., she received her BSc in Agriculture from the University of Guelph in 1963, and moved to Halifax in 1964, marrying James Edward Stewart in 1967. Heather, being a Jill of all trades, then personally designed, drew the plans, and supervised the building of the family house in St Margaret’s Bay, where she raised a family with two wonderful boys and lived until 2021. She adored spending time in her vegetable garden, and working to outsmart the crows and deer who also appreciated her efforts. She returned to university in the 90s to work on predator-prey relationships in apple orchards and received her MSc from Dalhousie in 1995. She was active within the Anglican Church and she absolutely loved working with The Bay Grandmothers, a social group supporting grandmothers in Africa who care for children orphaned by AIDS. Heather had a special knack to foster relationships with her grandchildren and get them to share all kinds of stories. She taught them knitting and how to source a complete meal from her beloved garden and the sea at the doorsteps. Heather was the Macnab clan historian and could be relied upon to know family details when everyone else was at a loss. She was predeceased by her husband, James, and son, Ron. She is lovingly remembered by her son, Greg Stewart (Elisabeth Paul); her sister, Jeannie Macnab (Tom Anderson); her brother, Alan Macnab (Anne); her grandchildren, Felix and Andre. She was very close with cousins, Ron Macnab (Mary), Margaret Campbell (John), Elizabeth Bastin (George), and Helen Macnab, Debbie Dunbar, and Wendy Dunbar (Bruce). She became especially close with cousin and partner-in-crime, Catherine Macnab throughout 2021. A funeral service will be scheduled in the New Year. In lieu of flowers, please donate to the Stephen Lewis Foundation on her behalf.