To share your memory on the wall of Ian MacInnes, sign in using one of the following options:

It is with sad and heavy hearts that we announce the passing of our father and husband Ian Campbell MacInnes following a decade-long journey through Alzheimer’s disease. He navigated this challenge in the same tenacious and steadfast way that he led his amazing life.

Coming from a lineage that crossed the ocean during the Highland Clearances from the Isle of Skye, Scotland and growing up and starting his life on the MacInnes family farm in Hortonville, Nova Scotia stead him well in his approach to life.

Ian’s education began in a two-room schoolhouse and culminated when he graduated from Acadia University with an Applied Sciences degree. Humble beginnings in construction led to Ian joining Tidewater Construction as Project Engineer for the construction of the breakwater in Port aux Basques. Ian soon realized that to attain the leadership and authority roles within an organization, he would need to further his education. He went on to attend and graduate from McGill University with a Bachelor of Engineering.

During his last year at McGill he started Quemar Construction Co. and for ten years he specialized in work for oil companies. Ian then moved into the highways business, working first as a partner in Aberdeen Paving and then in general contracting with his new company Colmac. During this period, he built over 100 houses including the streets, services & power lines - all in Goosebay, Labrador. In 1969, ready for a new challenge, he formed Ian MacInnes Enterprises Ltd. (IMI) and became a top distributor for such companies as Master Builders and Dow Chemical of Canada Ltd. This became Ian’s life’s work until he retired.

It wasn’t all work and no play; Ian always had, and fostered, a strong sense of community. He loved hosting his legendary Oyster - Beer Bash each year in the IMI warehouse, inviting all his suppliers and business associates for a huge evening of fresh-shucked oysters, wine and cheese and dories full of beer on ice.

Ian believed one of the most important things in life was to give back to the industry that supports you, so he willingly gave his time and energy to the areas he felt needed it most. He followed that ethos into his home community as well, serving on the Bedford Service Commission and acting as Chairman of the Bedford Recreation Committee, which was responsible for the construction of the Bedford Rink. Ian also served as Chairman of the Board of School Trustees, where his goal was to improve the music and physical education programs.

Ian’s personal passions were sailing, golf and bridge. He took up sailing when his children entered the sailing program at Bedford Basin Yacht Club and he embraced the sport and found a love for being out on the wide-open ocean. He enjoyed numerous sailing trips and adventures and he and his crew amassed numerous trophies from the famous Marblehead to Halifax race. He could always be found sailing around the islands in Chester and Mahone Bay and his annual Mooseburger Beer Bash during Chester Race Week was an evening not to be missed!

When not sailing, Ian loved nothing more than to be striding down a beautiful long golf course and he did so regularly. Upon retirement, his love of golf flourished and he more than halved his handicap. Ian and Rosemary enjoyed many trips and rounds on the famous Scottish and Irish courses and at his favourite home courses ‘The Chester Golf Club’ in N.S. and ‘The Hole in the Wall’ course in Naples, Florida where he had also served as a Member of the Board. He was also on the board of The Port Royal Club and an avid bridge player and President of The Naples Athletic Club in Naples.

Ian was the beloved husband of Rosemary (Murray) and the loving and proud father to Holly, Heidi (Bruce Bradley) and Brian (Danielle Noll). Ian was a loving grandfather and expert waffle maker to Campbell Legere (Pierre Legere), Rock and Sutton MacInnes, and will be sorely missed by his brother Bill and his wife Gail. Ian was predeceased by siblings, Shirley, Jim and Ann, and parents Sam and Marjorie.

We would like to give heartfelt thanks to our Doctor Holly Zwicker, Kathy Thomson, R.N. and Owner/Operator of Sheldrake Lodge and everyone that works there that took such incredibly good care of Ian these past years and made it a second home and family for him and us as we went through all of this together.

There will be a gathering of family and friends on Saturday, September 21st at the Chester Golf Club from 6pm onwards to raise a toast to Ian and enjoy some time together in his memory.

Donations in Ian’s memory to help advance research into Alzheimer’s may be made to Dalhousie Medical Research Foundation: https://dmrf.ca/ways-to-give/in-memoriam-tribute/
Read Less

To send flowers to the family or plant a tree in memory of Ian Campbell MacInnes, please visit our Heartfelt Sympathies Store.

Receive notifications about information and event scheduling for Ian

We encourage you to share your most beloved memories of Ian here, so that the family and other loved ones can always see it. You can upload cherished photographs, or share your favorite stories, and can even comment on those shared by others.

Guaranteed hand delivery by a local florist
B

Rosemary and Family. It was sad reading of Ian's passing. There is some consolation, though, knowing that the ordeal is now over. Ian will be missed by many friends, especially the golf crowd.Our generation is fast disappearing, but we have many fond memories of happy times together in earlier days. My sincere sympathy to you all; hope to see you in September.
Comment Share
Share via:
MB

Posted Jul 05, 2019 at 06:15am
On behalf of the Canadian Construction Association, please accept our sincere condolences. Ian was a long serving supporter of the construction industry in Nova Scotia and at the national level. He was the chair of CANS in 1975 and of CCA in 1979 - one of the 4 CCA chairs from Nova Scotia. This significant contribution of his time and effort to improve the industry for all is an important legacy. 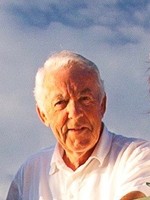