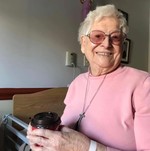 Isabel Catherine Zwicker (nee:MacKenzie)
of French Village, Nova Scotia
Isabel passed away peacefully October 7, 2020 at the age of 92. Born in Stellarton on Feb 14, 1928. She was the daughter of the late Hugh and Ethel (nee: Cameron) MacKenzie. Isabel moved to French Village in 1965 and became a fixture in the community. She was a member of St. Paul’s Anglican Church and belonged to the Loyal Seabright Union Lodge. She also volunteered on many community groups in the 50 years that she resided there.
Isabel was an avid baker and seamstress. She made delicious wedding cakes and was the owner of Katie Bell Doll Fashions, making and selling beautiful doll clothing at numerous craft shows over the years. She also returned to finish high school in 1980, much to the horror of her teenage children. Known to many as “Mum or Nanny”, her door was always open to family and friends alike. Isabel loved movies, Jeopardy, singing (which was her second language) and anything related to Christmas. She and Gordie would decorate and light up the house from early November to mid January, and Christmas was not Christmas without her legendary fruitcakes and shortbread cookies.
Family was everything to Isabel and even though she was not always the easiest person to live with at times, she loved us all deeply and will be missed forever.
She is survived by daughters, Elizabeth (Dwaine) Isnor, Sheila Psaila, Michele (David) Organ, Susan (Carl) Rogers; Sons, Jim (Barb) Zwicker, Robert (Olga) Saulnier, Thomas Saulnier; Stepdaughter, Sylvia (Don) Power; Children, Arlene Schipfel, Sharon Wilson, Hugh Parker (raised by their grandparents); Grandchildren, Alicia and Clayton Isnor, Rachel and Cassie Zwicker, Maria and Liam Psaila, Dylan and Mickayla Organ, Sarah Isnor, Jeffery, TJ, and Catherine Saulnier, Penne Lesperance, Philip and Jeff Childs, Philip Wilson, Doris MacLeod, Alex and Richard Parker, Nicole Cestnick, Michelle and Angela Constaintine; 23 great grandchildren; Brothers-in-law, Owen (Linda) Smith, Frank Smith; sisters-in-law, Nora Picard, Elsie (Wayne) Manuel, and Hilda Olive; Special cousin, Doris Arnold and numerous Nieces and Nephews.
She was preceded by husbands, Jim Zwicker and Gordon Smith; Sisters, Sheila Patterson, Betty Gribbon; brother, Alex MacKenzie, Stepdaughter, Roxy Childs; sons-in-law, William Psaila, Geoff Wilson; Brothers-in-law, JP Picard, Herb Patterson, George Olive, Walter Gribbon, Lawrence and William Zwicker; Sisters-in-law, Joan MacKenzie and Isabel Ritchie.
The Family would like to thank all the nurses and staff of White Hills long term care centre for their passionate care of mum over the last three years, and their love and support at the end of her life. Thank you to Rev. Brieanna Andrews for her prayers and support.
Cremation has taken place. There will be no funeral at Isabel’s request, and a private family burial will take place at a later date.
Donations can be made in Isabel’s name to St. Paul’s Anglican Church, French Village, or a charity of your choice. Online condolences can be made to www.rawalker.ca