To share your memory on the wall of Joan Delamar, sign in using one of the following options:

Joan was born to the late Harry and Elizabeth (Lamb) Blundell on August 20, 1923 in Haskayne, Lancashire, England, the eldest of five daughters.

During world war 2 Joan served in the Women’s Land Army in Somerset, England. In 1946, Joan and her husband Doug were married in Halsall, Lancashire, England and started their family in Haskayne. In 1956 Doug immigrated to Canada, followed in 1957 by Joan and their children Susan, Stephen, and Elizabeth. The family settled in Hackett’s Cove, where they lived full, long lives together until Doug’s passing in 2004. Joan’s work career included positions in Simpsons-Sears and Nautel.

Following their retirement, Joan and Doug co-founded the Saint Margaret’s Bay Whitecaps Club in 1983. The Whitecaps grew into a very popular seniors’ club, filling a need in the Bay area. Joan successfully organized many popular excursions, taking club members on trips locally, across the country and around the world.

Joan was predeceased by her husband R.D.(Doug) Delamar in 2004, and by sisters Sally, Betty, Molly, and Ruby.
Cremation has taken place and interment will be scheduled at a later date.
In lieu of flowers, the family requests that donations can be made in Joan’s name to the QE2 Foundation-Palliative Care Unit, St. Peter’s Church, Hackett’s Cove, or the BCCDC Foundation for Public Health.

The family wishes to thank all the workers from Northwood Home Care who helped Mum to stay home with us, especially Felicia, Cynthia, Cindy H, and Brittani. Thank you to Dr Katherine Quackenbush for her care over the years. Much appreciation and love to our friends and neighbours who have reached out to support us through Mum’s journey.

We will be forever grateful for the loving care and support given to Mum and Susan by the VG Palliative Care unit, enabling us to make Mum’s journey as peaceful as it was. You are all earth angels.
Read Less

To plant a memorial tree in honor of Joan Delamar, please visit our Heartfelt Sympathies Store.

Receive notifications about information and event scheduling for Joan

There are no events scheduled. You can still show your support by sending flowers directly to the family, or planting a memorial tree in memory of Joan Delamar.
Plant a Tree

We encourage you to share your most beloved memories of Joan here, so that the family and other loved ones can always see it. You can upload cherished photographs, or share your favorite stories, and can even comment on those shared by others.

Posted Nov 05, 2020 at 07:56pm
Susan,
I am so sorry to see your Mom passed away. I still remember the good times we had hanging around your home in the summer many years ago. I'm sure we must have tested your Mom's patience at times.
Dee joins me in sending our condolences.

Posted Nov 03, 2020 at 09:58am
So very sorry to learn of Joan's passing . My sincere condolences to Joan's family - its so very difficult to lose a loved one. I've known Joan for many years as we worked at NAUTEL together.

Posted Nov 02, 2020 at 05:49pm
To say my Grandmother played a big role in my life would be an understatement. I have so many fond memories of time spent at my Grandparents house. Nanny was patient enough to show me how to do every task she did. She taught me so much. How to embroider, to use a Loom, how to polish silver, how to oil wood furniture, gardening.. you name it. She was patient enough to let us help with any tasks whether it was shelling peas (yuck), making muffins or whatever she was doing. She taught us 5000 uses for an imperial margarine container) she was recycling and composting long before it was a thing. We were also allowed to run and have fun and be kids (outside! stop running in the house!). It is true that Grandparents get to love you unconditionally with none of the fuss of parenting. We always had our own room in her house with our own special sheets in yellow and purple and those are our favorite colors still today. She saved fancy slips and gloves for dress up clothes and we had a "secret hideout for toys under the stairs".
As a child I had drawn about 10 maps on the inside of my closet at home-outlining my escape route to my Nan's house. My plot to escape when my parents dare try and parent me.... I never really followed though..
We were so lucky to have shared holidays and special occasions with them but the little things counted most like special treat Chef Boyardee pizza kits we would make as kids when we stayed, over the soda "floats" they would make for us.

I always looked forward to her visits out west and she always made a point to stay with us, I loved our time together. Lena loved her well.
Its true she lived a long life, and that means I got to spend 50 years with my Grandmother (some afar but never afar in my heart) and there you shall remain Nan.

I will love you forever.

Posted Nov 02, 2020 at 09:58am
Dear Susan and family. Don and I were sad to hear of the passing of your mother. She is now in God’s arms but she will live forever in your memories.
Comment Share
Share via:
PE

Posted Nov 02, 2020 at 07:46am
So sorry to hear about your loss. Our family ( George Close & Theresa ) have fond, happy memories of the many parties and get togethers during the younger years. George is turning 90 this year, other than memory issues, doing well, Theresa passed six years ago. I ( Pat) personally still think of dear Elizabeth . Best to you all. 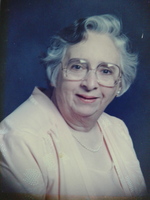