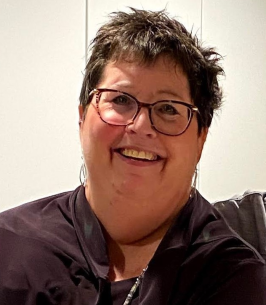 of Upper Tantallon, Age 58, died February 12, 2021 due to complications from breast cancer.

Joanne was born on March 28th, 1962, in London, Ontario. Raised in Woodstock, Ontario, Joanne would go on to study finance at Wilfred Laurier University in Waterloo, Ontario. On August 17, 1991, she married Kevin. Their only child, Graham, was born March 5, 1993. By 1995, the Young family had relocated to the east coast, where they still reside to this day.

Joanne had a boisterous personality, and her strong will was matched only by the love and affection she displayed to those close to her. Joanne spent an immense amount of time and energy advocating and raising awareness for Cystic Fibrosis Canada and the Canadian Cancer Society, two causes that due to unfortunate circumstances, were always present in her adult life.

Joanne’s loving nature extended beyond that of just her family and friends. An admirer of all animals, she will be missed greatly by her dog, Tig, and cats; Kiki, Lola, and Edwin. Over the years, Joanne had many pets, and fostered numerous litters of kittens before they were set for adoption.

Joanne had grand dreams for her upcoming retirement. She longed for the ability to travel abroad, to explore and experience life at whatever pace she desired. Joanne fought fiercely through until her last day to try and see those dreams come to fruition. Let Joanne’s memory serve as an example to everyone to always embrace the time you have with loved ones, and to seize all opportunities to live life to its fullest.

In lieu of flowers, we ask that you consider donating to Cystic Fibrosis Canada or the Canadian Cancer Society. In accordance with Joanne's wishes, a small celebration in memory of her life will be held at a later date this year at Long Island, Cape Breton, a location she always referred to as “her happy place”.