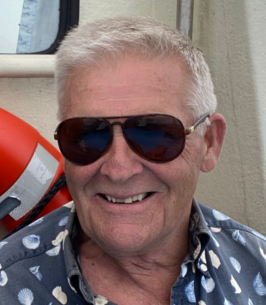 It is with profound shock and sadness that we announce the passing of Larry Edward Dowding, 71 of Head of St Margaret’s Bay. Larry was the son of the late George and Ermie (Mclean) Dowding. Larry started his career with Halifax dockyards where he started in the fitter shop. He then earned his marine engineering ticket where he began working on the HMCS Sackville and later the HMCS Quest. He then worked with the queens harbour master as a dredge master on the floating crane until retirement after 35 years of service. After his retirement he worked part time with Atlantic towing on the harbour tugs. Larry spent 20 years as a volunteer firefighter at the black point fire dept. He was a founding member of SMATVA. He was an avid outdoors person with many interests including going back to his camp on the ATV, hunting and boating with his pride and joy boat “Amanda Raine “which he built with his late wife Cathy which they had many years of enjoyment and adventures on. He was always one for an adventure whether it be something new for him or the chance to show someone something he had stumbled on. “Keep out “signs did not exist. Larry loved machinery and was always tinkering in his shop whether it be for himself or to help someone else. Larry with his brother Ron, designed and built their very own sawmill which they operated with great success at the woodlot. He enjoyed working with his John Deere and made sure his grandson knew how to fully operate it well. Larry loved to tell stories; they always seem to be a little more embellished with each time told. We will miss his interesting meal creations. He always loved to entertain and cook for others whether it be at a camp, out in the boat or at home. He will be sadly missed by his daughter Amanda, son in law, Mark Richard and his grandson Mason, the joy of his life. Brother and best friend Ron, sister-in-law Barb, niece Natasha (Gavin Mills). Aunt and Uncle Scott and Ruth Mclean, cousins Murray and Joan and their families. He leaves behind many friends, along with his lifelong friend Dave Dorey. Besides his parents, Larry was predeceased by his soulmate Cathy (Peters) in 2001, brother Peter in infancy. Donations can be made to St Georges Anglican Church, Head of St, Margaret’s Bay. Family will be celebrating Larry with a drop in at SMATVA club house Friday August 19 6-9pm. 15 Station Road, Head of St Margaret’s Bay.