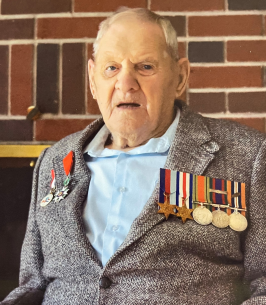 Born at home on December 18 1920, he lived most of his life in Glen Haven before moving to Seabright. He was a hard worker all his life, working full time while raising farm animals & growing a garden to feed his large family.

He was extremely proud of his WWII service with the 5th Anti-Tank Brigade 4th Armored Division. Landing shortly after D-day he fought through France & participated in the liberation of Holland. He was Mentioned in Dispatches. He also received the Legion of Honour medal from France.

After returning home, he worked on the upgrading and paving of the Peggy's Cove Road, poured cement and worked at Oland’s Brewery for 35 years.

He built his own home and many for his children. Gardening was something he enjoyed so he always had a garden including several with 8-foot walls of netting to keep the deer out.

Special thanks to the staff of 6W at Camp Hill, his caregivers Linda, Bernice and especially Brenda who could never seem to beat him at cards.

A Celebration of Life will be held 11 a.m. Tuesday, June 21st in the Ronald A. Walker Funeral Home, Upper Tantallon. on-line condolences may be left at: www.rawalker.ca. In lieu of flowers, donations may be made to IWK or Charity of your choice.