To share your memory on the wall of Michael Law, sign in using one of the following options:

Mike grew up in Oakville, Ontario and spent summers at his beloved Butternut Bay. After Queen's University, he fulfilled his boyhood dream of playing professional football as a starter with the Edmonton Eskimos for 6 years, and finishing his career with the 1973 Grey Cup champions Ottawa Rough Riders. After marrying a maritimer, Mike agreed to move to Nova Scotia for a year. He soon became the most devoted of maritimers and stayed for almost 50 years. Mike worked in education as an administrator and a teacher. He had a tremendous influence on many of his students. Spending winters in Wentworth allowed Mike to become involved with the ski community and the community at large. He loved most.. his boys, his 2 sisters, his dogs and me. (I think)
Cremation has taken place and there will be no services at this time. Instead, take a moment to remember Mike... his wit, kindness, gentleness and thoughtfulness. He will be missed by his family and all who knew him.
Mary Ann, Jonathan, Jeremy and Gracie.
Read Less

Receive notifications about information and event scheduling for Michael

There are no events scheduled. You can still show your support by sending flowers directly to the family, or planting a memorial tree in memory of Michael D Law.
Plant a Tree

We encourage you to share your most beloved memories of Michael here, so that the family and other loved ones can always see it. You can upload cherished photographs, or share your favorite stories, and can even comment on those shared by others.

Posted Mar 27, 2021 at 12:43pm
We have just learned of Mike's death.It was with deep sadness. Mike &n his family were an integral part of our life in Wentwotth. He built their cottage on one of our lots. When he & Mary Ann came to our cottage inquiring about our lots one of their main questions was were there any trees. In fact there were many tress & it bordered on the Wallace river. Mike & I raced together in Brian Todd's Masters races. Mike was as smooth as silk. Our son Clive also raced with Jonathan & Jeremy. Mike & I had many great discussions as neighbors about philosophy & life in general. And he & I & Charly Gass had memorable crib games at our cottage "Edgemere". We are glad Mike was a part of our lives. He will be missed.
Deepest condolences to Mary Ann, Jonathan & Jeremy
Ken, Rose Marie & Clive Giffin
Comment Share
Share via:
JF

John and Alma Furneaux and family

Posted Mar 19, 2021 at 05:45pm
Dear Mary Ann ,Johnathan and Jeremy , we were saddened to hear the news of Mike’s passing . Our families love ,prayers and condolences go out to you at this time of your loss.
It is for many years that we have known Mike and his lovely family. He will be greatly missed and our thoughts are with you all our love John,Alma Karen,Barb and Todd -and Laura.
Comment Share
Share via:
AM

Posted Mar 19, 2021 at 01:42pm
Mary Ann, Johnathan and Jeremy:
My sincere sympathies on the passing of your dear husband and father. Mike was a man of integrity and sincerity. My years at Charles P Allen as his colleague will always be cherished times. His sense of humor brought levity to our days. Mike's contribution to the growth and development of his students as an educator and his leadership as our physical education supervisor will be a lasting legacy. A real Gentleman is who Mike Law was as a person.

Posted Mar 15, 2021 at 06:40pm
The Law Family,
Many years ago, I had worked with Mike developing the Health Curriculum for the Halifax County junior high schools. We had a great committee of County teachers with Mike at the helm. We shared lots of laughs while accomplishing a very successful program. Mike always was so approachable, friendly, helpful and professional. I am very saddened to have heard of his death. May all the wonderful memories you shared, help you at this difficult time.
With sincere sympathy,
Dorothy (Dot) Lutz
Retired Teacher
Sackville Heights JuniorHigh
Comment Share
Share via: 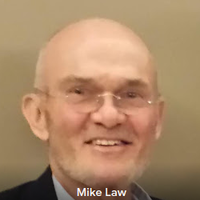