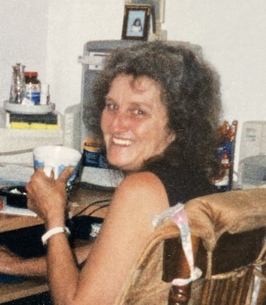 Peggy Ann MacIntyre passed away suddenly in the home she built in Hammonds Plains on February 16, 2022. She was born January 29th, 1952, and raised in Spryfield. She was the daughter of the late Dorothy Marie (Sampson)Tanner and Allan Steven Tanner. Beloved sister of Gerald Tanner, Patrick Tanner, Barbra Staples, and Dosey O’Riley. She had countless nieces & nephews that will miss her dearly.

Peggy leaves behind her loving husband & soulmate of over 48 years, Gregory Bernard MacIntyre. Shortly after they were married, they began their family. Peggy had 4 daughters, Patricia, Dorothy, Heather and a predeceased daughter, Mary Ann. Peggy was an amazing grandmother (nanny) to 8 grandchildren, Trenton (Trent), Justin (Biggie), Kimberly (Binky), Allyssa (Bean), Hailey (Hailey baby), Kandyce (Kandy-Girl), Landen (Puddles) & predeceased by a grandson, Makyle. Peggy was blessed with 3 great grandchildren Ma-rez, Ma-laya, & Bentley. All of whom she loved immensely and without judgment.

Anyone lucky enough to have known Peggy, knows she was a hard worker and could always be counted on to lend a helping hand. Anything from driving around in the middle of the night looking for your lost pet, to making sure you had a warm place to visit when you needed a friend.

She valued loyalty, honesty & authenticity. She was a great judge of character. She didn’t worry about your background, race, gender, or sexuality. She truly believed that what mattered was on the inside. In a world often caught up in hate, Peggy looked for people to love. She was a lover of all animals and treated her pets like an extension of her family.

She was a music lover like no other. When you entered Peggy & Greg’s home, you were usually greeted by the sound of music from any genre or decade. She loved playing “who’s singing that song” something that was started back in her childhood with her brother & best friend Gerald and continued to be played with her children & grandchildren.

Peggy was full of life, and we will miss her immensely. Her love will continue to guide us throughout our lives. However, can take comfort in knowing, that she will finally be reunited with her parents (Dot and Al) her sisters (Mary, Alma and Caroline) and her sweet baby daughter Mary Ann.

In lieu of flowers, donations can be made to an animal rescue charity in her honour.