To share your memory on the wall of Ralph Wheadon, sign in using one of the following options:

Born in Halifax he was the son of the late Ken and Lela (Nickerson) Wheadon... Read More
Ralph Kenneth Wheadon – 92

Born in Halifax he was the son of the late Ken and Lela (Nickerson) Wheadon.
Ralph loved sports. As a youth, living close to Ashburn he would often show up to caddy and when not otherwise occupied he would take his chances and sneak onto the course to practice. He also enjoyed playing hockey (Fairview Aces, Bridgewater) and football (QEH) in Halifax. Standing 6’3” with shoulders as wide as a barn door and hands the size of grappling hooks his “bull in a china shop” tenacity instilled just a shade of fear in his opponents.

An avid outdoorsman, Ralph had a deep passion for hunting and fishing. Right up to the end he would recount with great clarity tales from his hunting and fishing days especially his trips to the camp in Ellershouse where he and his father spent many hours together. Taking his children there as they grew-up he taught them survival skills such as how to ice fish, build a fire or make a bed of fir bows or just how to survive a weekend with Big Foot.
After a brief stint as a linesman his love of the forest, coupled with his fear of fallen arches from climbing power poles led him to the Maritime Ranger School in Fredericton. He graduated with honours in 1950 and began work for the Nova Scotia Department of Lands and Forest in 1951 becoming the provinces first permanent forest ranger. During his career he chased poachers, helped to build the Lewis Lake Depot, protected crown lands, fought fires, managed woodlands, built connector roads, scaled logs and was involved in creating local provincial picnic parks and was instrumental in the design and building of Jerry Lawrence Provincial Park. He managed the Lewis Lake Depot for 25 years. Ralph retired as Supervisor Forest Resources for Halifax County in 1986.

Ralph met and was the successful suitor of (and she had many) and married Genesta (Jan/Jadie) Innes in 1955. Of the many things that attracted him to her was her love of the outdoors (she hunted and fished with the best of them). She was pretty cute too. Together, they raised nine children who all inherited either their love of team sports and or outdoors life.

Many family vacations were spent at Ocean Beach, Bass Creek, Judique and Lake Ainslie. At Ocean Beach he would allow us to drive the car as we sat on his lap steering our beloved Volkswagen’s through the field of brown eyed susans. One of dad’s greatest gifts was squeezing him, mom, 9 children plus some of our friends into a Volkswagen beetle (the original) and drive to Cleveland Beach. People watched in disbelief as we exited the car. During one of these ‘shows’ a stranger rowed ashore went straight to Dad and asked him “How did you do that’? They just kept coming and coming.”
Dad and Mom loved to golf. They were members at Northumberland Links and later on Old Towne for many years. Dad loved to talk about his slice and how on NL No. 4 he would aim out over the ocean and was thrilled when his ball landed safely on the green.
He was a member of the Masonic Lodges in Timberlea, Maitland and St Margaret’s Bay where he served a term as Grand Master. He served as an advisor for the Five Bridges Wilderness Trust who honoured him in 2016 with the naming of the Ralph Wheadon Trail. Ralph was further honoured in 2019 receiving thanks for his lifetime of service to forestry from the Nova Scotia House of Assembly.

A private family service will be held at a later date. In lieu of flowers donations in his memory to the Five Bridges Wilderness Trust would be appreciated. Happy Trails, Ralphie.
Read Less

Receive notifications about information and event scheduling for Ralph

There are no events scheduled. You can still show your support by sending flowers directly to the family, or planting a memorial tree in memory of Ralph Kenneth Wheadon.
Plant a Tree

We encourage you to share your most beloved memories of Ralph here, so that the family and other loved ones can always see it. You can upload cherished photographs, or share your favorite stories, and can even comment on those shared by others.

Posted Apr 12, 2021 at 10:50am
My brother Randy and I would like to express our deepest sorrow in the loss of your Dad. Your Dad and Grandfather Ken were held in high regard by our family and we're honoured to spend time with them in the "camp" back in Ellerhouse, hunting and fishing around West Lake and Pine Lake. The times in Bramber and Bass creek were special. I would see Ralph at numerous Masonic functions and would catch up. I am saddened by the missed opportunities I had to visit him and discover more about the ties that bound our families ib the past. All the best and God bless. Cheers, John Cameron
Comment Share
Share via:
KH

Posted Apr 10, 2021 at 09:04pm
I'm very sorry to hear of Ralph's passing. We went to Ranger School together in Fredericton and graduated at the same time. Over the years we'd meet up through our work, and it was always a pleasure to see him. He was conscientious, ever-interesting, and very much respected. The last time I had the pleasure of chatting with him was at his 90th birthday celebration, and he still has that zest for life. My thoughts are will you all during this time.
Comment Share
Share via:
KI

Posted Apr 09, 2021 at 01:52pm
Our deepest condolences at this difficult time. Your father certainly lived life. I always enjoyed his stories.
Keith and I are thinking about you and send our love.
keith and sheila
Comment Share
Share via: 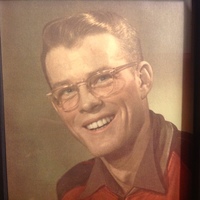