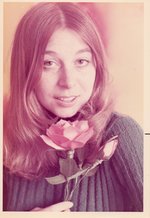 Ruby “Rusty” McClelland of Boutilier’s Point passed peacefully under the exceptional care of Hospice Halifax on January 24th, ending a three decade ordeal with cancer. She was 72 years young.

She was born as Luba Swonarow on May 25th,1946 at a refugee camp in Wiesbaden Germany to a freed Russian prisoner of war (Misha) and a rescued Russian prisoner from Auschwitz (Katya). Once released from the camp, the family moved to Northern Quebec and travelled throughout Quebec and Ontario before settling in Sudbury, Ontario. She became “Ruby” when her parents opted to name her for her hair color upon immigrating to a new country.

Ruby quickly adapted to Canadian culture and the English language and became a champion for her family’s experience in the early days. She used her schooling and knowledge to advance her family’s interests. When they moved to Oshawa, she left home to work in Toronto. She later opted to leave Toronto to study political science at the University of Western Ontario where she met the man she would be with for the rest of her life, Gary McClelland of London, Ontario. After graduating Western, she followed Gary to the University of Guelph where she decided to pursue a possible career as an artist. She attained an Honours degree in Fine Arts. She married Gary in May of 1971 at Trinity Anglican Church in Toronto before they embarked on a new life in Boutilier’s Point in Nova Scotia where they would reside for the rest of her life.

She loved her new home in Nova Scotia. She spent over 30 years working in the civil service for the Provincial Government. Perhaps maintaining that need to protect those with less advantage than she was afforded, she spent those years seeking policy options that would benefit those who struggled the most. When she retired from the provincial government, she took employment with the United Nations and worked towards helping Kosovo find its way to independent self-governance.

Back in Nova Scotia, and in her free time, Ruby maintained her interest in art and became a frequent figure in the local Art, Antique, and Collectible scene. She spent her weekends at auctions and shows all over the province trading, buying, selling, and, most of all, haggling over price. It was her favorite pastime.

She was a strong, determined, and opinionated woman who had a big heart. She fought for her friends and family, often to their annoyance but they respected it nonetheless. She had a wicked sense of humour and a spirit that her family and her many friends across the globe will always remember.

She is survived by her loving husband Gary McClelland of Boutilier’s Point, her daughter Rory McClelland of Toronto, Ontario, and her son Liam McClelland, his wife Chie, and her granddaughter Anna, of Sutton, London, England. A service will not be held but a celebration of life will be planned in Nova Scotia that will be announced at a later date. It will be in the Spring and involve a lobster dinner as Ruby was so happy to have been well enough a few months ago to make it to a final lobster dinner at the Shore Club before becoming too weak from this terrible cancer. If you would like to be notified of the date, kindly leave a message here or contact the family directly.

In memorial, the family is accepting donations to important Bone Cancer (Sarcoma) Research at the Princess Margaret Hospital in Toronto where her grand niece at 19 years of age is unfortunate to be seeking treatment (https://thepmcf.ca/Home). The family is also accepting donations to Hospice Halifax (https://hospicehalifax.ca/donate-now/) which provided extraordinary care for her during her last days. They are eternally grateful for that care.