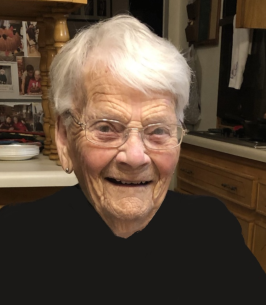 Head of St. Margaret’s Bay, passed away on February 21, 2022, her 96th birthday after a life well lived. Born in Saint John, NB, she was the daughter of the late Frank and Mary Howland and the last remaining member of her family. She was predeceased by her husband Eric in 2007.

Ruth graduated from the Moncton Hospital School of Nursing in 1954, working at the hospital and in private duty nursing before focusing on raising her two children and providing community service in Moncton and later in the St. Margaret’s Bay area where she and Eric moved in 1985. Ruth, known always as Ma to her classmates greatly enjoyed the friendships she made in nursing school, especially that of Sadie Alward with whom she spoke almost everyday for many years. She wore her nursing school ring proudly everyday.

Ruth was an active member of the United Church, serving as one of the first two women elders at Mt. Royal United Church in Moncton. She helped design two church kitchens, was very involved in the church Meals on Wheels program and played many roles in the UCW. Ruth volunteered at the IWK Children’s Hospital and for many years, made and delivered sandwiches to Hope Cottage. She was an avid walker, berry picker, gardener, beekeeper, fisherman, canoeist, adventurer, cookie maker extraordinaire, and a great friend to many.

Surviving are Ruth’s daughter, Anne (Malcolm) Maxwell and their son James (Christina), Head of St. Margaret’s Bay, NS; her son Boyd (Deborah) and their children Brian (Kristen), Meredith (Bill) and Patricia (Clayton) and two great grandchildren John and Parker, Fredericton, NB. We will miss her dearly. A family celebration of Ruth’s life will be held at a later date. As expressions of sympathy, donations to St. Luke’s United Church, Tantallon, the Alzheimer’s Society of NS, St. Margaret’s Bay Food Bank, Heart and Stroke Foundation or other charity of choice would be appreciated by the family. On-line condolences can be made at www.rawalker.ca.