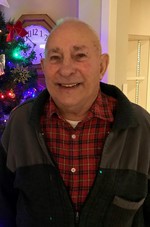 A lifelong resident of St. Margaret’s Bay has come to rest. He passed on March 22nd 2019 at Northwood Ivany Place with family by his side. He was born on January 26, 1933 in Seabright to Carney and Evelyn (Boutilier). He was a business man having started his own business, W.N. Hubley Excavators, early in life and continued until his retirement. He was known for his hard work and knowledge. Many foundations, wells and septic systems were dug around St. Margaret’s Bay, as well as land clearing, foundations dug, recreation fields raked and sodded for newer schools in the Halifax Region. Truly his first love was for the water. He loved to be out in a boat, sailing or fishing and in his later years just watching them. He also loved to hunt and tend his vegetable garden. He was predeceased by his parents, Carney and Evelyn, his wife Judy (Redden), his son Wade, his sisters Marion (Boutilier) and Jean (Burns). Surviving are his sons, Nelson (Ronald), Phillip (Vicky), Timothy (Holly) and Steve. His grandchildren, Laura, JR (Wade Junior), Daniel, Jacob, Emily, Conor, Jack and six great-grandchildren. He is also survived by his brother Laurie (Tantallon), and sisters, Esther (Donald) Redmond (Tantallon), Mildred Hubley (Seabright), and Nancy (Victor) Dorey (Pugwash). The family wishes to extend their most sincere thanks to the staff at Ivany Place, who helped look after Dad and created a home-like environment for the last stage of his life. A special thank you, to Cyril Smith, whom Dad considered a dear friend and spiritual guide and his nephew Ray Hubley, who would come to visit on a regular basis, bringing his guitar to entertain Dad. Visitation and reception will be held Tuesday, March 26th from 6PM-9PM at the Ronald A. Walker Funeral Home Tantallon. The funeral will be held on Thursday, March 28th at 10 AM at the Tantallon Seventh Day Adventist Church, Pastor Peter MacPherson officiating. As per Dad’s wishes a private family burial will take place following the service. In lieu of flowers, donations may be made to the Northwood Foundation (Bedford campus) via www. nwood.ns.ca/foundation. Condolences may also be sent to www.rawalker.ca.