To share your memory on the wall of Isabel Zwicker, sign in using one of the following options:

Receive notifications about information and event scheduling for Isabel

There are no events scheduled. You can still show your support by sending flowers directly to the family, or planting a memorial tree in memory of Isabel Catherine Zwicker.
Plant a Tree

We encourage you to share your most beloved memories of Isabel here, so that the family and other loved ones can always see it. You can upload cherished photographs, or share your favorite stories, and can even comment on those shared by others.

Posted Oct 29, 2020 at 12:19pm
So sorry Elizabeth and to all your family on the passing of your wonderful Mother/ grandmother. I remember her fondly of being such a caring, loving lady , always interested in what you were doing and keeping you up to date on happenings in the French Village area. She was so supportive and encouraging to me when I started my Mary Kay business, which was much appreciated at the time. It was always a delight visiting her in her home, relating stories of events, people and history of French Village/Glen Haven. She was fiercely proud of her children and grandchildren and I am sure you will all dearly miss her. She was one of a kind and the world is a sadder place without her. My deepest condolences and prayers are with you at this time. Joannie Williams (formerly of Glen Haven)
Comment Share
Share via:
JB

Posted Oct 20, 2020 at 06:58pm
I can remember your mom in John a with us all. She was like a mom to everyone there at the school. My condolences to you all for your loss. Sincerely Janet Brine (Richardson)
Comment Share
Share via:
DP

Posted Oct 19, 2020 at 09:00am
Elizabeth and family, I am so sorry for your loss. Elizabeth, I had no idea that “Mrs. Zwicker” was your Mom. Anytime she came to the pharmacy she was always such a joy to see.,Always happy and always calling every one “Doll”. Such a lovely lady!
Sincerest Condolences,
Donna
Comment Share
Share via:
D(

Posted Oct 19, 2020 at 07:34am
To the Zwicker family, especially my sunshine Sheila, I am so sorry to hear of your mom's passing. I remember going to visit as a young adult and the goodies she would drop off to Sheila and I. Great memories I will have forever. I will be thinking of you all.
Love
Carmen Jeffrey
Comment Share
Share via: 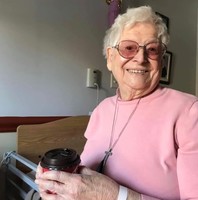