To share your memory on the wall of Joseph Ambrose, sign in using one of the following options:

Born in Scotland in 1922, Jack joined the Scots Guards at the age of 16 and served in World War II. He was posted to London, England, where he met and married the love of his life, Hilda, in 1943. They settled in England and had a daughter, Janet, in 1948. Following the war Jack put his gift for connecting with people to good use, first becoming a salesman, and eventually opening a grocery store and butcher shop.

In 1982, Jack, along with his wife Hilda, emigrated to Canada so they could be closer to their beloved daughter, son-in-law, and four grandchildren. They settled in the Annapolis Valley and quickly made the community their own, becoming actively involved in a number of clubs and organizations and making many dear friends along the way.

Jack was predeceased by his wife, Hilda (2009); sister, Ella (2018); and his son-in-law, Waynne (2017). He is survived by his daughter, Janet; his four grandchildren, Michelle; Marc (Cherie); Nicolle (Mario); and Julia (Dave); and his four great-grandchildren, Kale; Brendan; Luca; and Matteo. He will be laid to rest in a family service.

Jack was an eternal optimist with a positive outlook on life, and a warm smile and story for everyone he met. He will be missed dearly, but is reunited with Hilda, where they are undoubtedly dancing cheek-to-cheek. In lieu of flowers or donations, please honour Jack’s memory with a kind deed for someone else.
Read Less

Receive notifications about information and event scheduling for Joseph

There are no events scheduled. You can still show your support by sending flowers directly to the family, or planting a memorial tree in memory of Joseph Harold Ambrose.
Plant a Tree

We encourage you to share your most beloved memories of Joseph here, so that the family and other loved ones can always see it. You can upload cherished photographs, or share your favorite stories, and can even comment on those shared by others.

Posted Nov 25, 2020 at 08:48am
Our sincerest Condolences to Jack's family ,when we lived in Fox Hill Kentville I would see he and Hilda often in the neighbourhood.They were a lovely couple and Jack had some great stories,from war time experiences to being a"Green "grocer "in England.Always enjoyed our chats.He certainly lived a full life that should be celebrated. 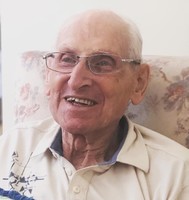