To share your memory on the wall of Robert Conrad, sign in using one of the following options:

Provide comfort for the family of Robert Conrad with a meaningful gesture of sympathy.

Provide comfort for the family by sending flowers

We encourage you to share your most beloved memories of Robert here, so that the family and other loved ones can always see it. You can upload cherished photographs, or share your favorite stories, and can even comment on those shared by others.

Posted Feb 15, 2020 at 02:15pm
We are so sorry to hear about Robert.We send our Love to Peggy & Girls May God give you comfort at this sad time.Love Angus & Carol Harvey.
Comment Share
Share via:
SH

Posted Feb 15, 2020 at 11:14am
Robert brought happiness to everyone who met him, and I feel honoured to have been included in that group. My heartfelt condolences to Peggy and the family. - Shirley Hines, Head of Chezzetcook
Comment Share
Share via:
SM

Posted Feb 15, 2020 at 09:42am
Bob was a rare mix of brilliant intelligence, practical simplicity, genuine humility, extreme generosity and living deep faith. We met Bob about 10 years ago when he would show up on various occasions at the church that I pastored at the time. He was the "man with the Bible under his arm." Later we had the privilege to know and count as family friends both Bob and Peggy, and to have many more blessed times together. Bob took my family to watch the tuna, we had breakfast at their home with breathtaking-view, he built a rocket with my son and enjoyed my daughter playing the harp. She had the ability to connect to everyone on a very personal level and encourage always with a gentle smile. He helped everywhere he could, though all was done without any boasting. He had a joyful glow that flowed from deep within his heart and proclaimed to the whole World his faith in a God that is very personal and near. The last book we read together just a week before his passing was "You are Special" by Max Lucado. His comment was: "I just wish that everyone would know how special they are to God. Life is so simple and joyful with Jesus." That was the last theological discussion we had... Yes, the last here. But Bob invited us all to know the heavenly realm, and I believe the best way to remember him and to honor his legacy is by looking and knowing the God in whom he believed and lived for.

Peggy, Sarah and family, Robyn, and extended family - may you know the comfort of the God in whom Bob believed and lived for. May your hearts be comforted by the many people who care and love you. Sending much love and prayers, Sara mK
Comment Share
Share via:

Posted Feb 14, 2020 at 05:27pm
Dear Peggy and family. I’m so very sorry to hear about Bob’s passing. He was such a gentle and kind man who will be dearly missed in our community. I’m wishing you strength during the difficult days ahead. Attached is a photo of Bob with my dog Lily from 7 months ago. We were at sea for a ceremony to honour Sheelagh and Fred. This is how I remember your cherished Bob - always willing to help and always with a smile.
Comment Share
Share via:

Posted Feb 14, 2020 at 04:58pm
Robert was a rare individual. He was an acknowledged expert in the fisheries he participated in; he was a man of great faith with a degree in theology; he thought deeply, cared deeply, and was a generous soul. I’ve been blessed to know Bob for over 20 years, and have enjoyed my interaction with him. He would often bring a book to church to show and talk about what he was currently reading, or just a word to find out if others understood its meaning the way he did. I’m grateful to have been among Bob’s many friends, and my sincere condolences go out to his family. I’m thankful also for the blessed hope we have as Christians, that this is not the end of Bob’s story.
Ron Scott
Comment Share
Share via: 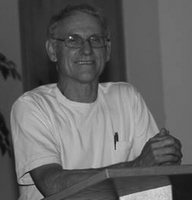